Social media can be an addictive platform as we never get enough of using it and are constantly looking for ways to enhance its features.

When we speak about the positive effects of social media, we should also consider the following ill effects of the most popular medium of communication in the 21stcentury – a false sense of connection, lack of privacy, decreased productivity, inability to think independently, added wasteful expenditure, increased appetite, online-offline influences and so on. 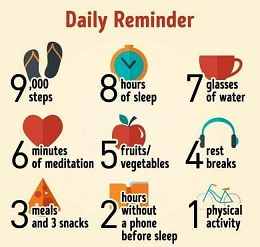 A false sense of connection

Since the introduction of social media, there’s been a decrease in real-life conversations. More people are building relationships online and drifting away from the real world. The more we post, comment and like, the more we feel closer to other people (whether or not we know them in person). Phones are smart enough to become a studio of conversation with people across the world. But these interactions and relationships are far from the real social life that is needed for holistic growth of a ‘social animal’.

“Check-in, at home, on the couch, with my popcorns, watching Star-Wars”.

Social media is encouraging people to become more public with their private lives. Users are easily giving out information that can be dangerous if leaked to the wrong person. Also, people have started sharing personal details that they would never reveal in a face-to-face conversation.

“The journey of a thousand sites begins with a single click”.

Social media can either increase or decrease productivity. It all begins with a single click of searching for some very important content, and then you come across an intriguing post about say, the first man on Mars, and the curiosity driven you clicks on it. After deciding to share the news with your friend, your friend comments, and ten more friends comment and it carries on… This and many other similar activities can decrease your productivity. Hence, you must work with discipline and try to avoid social media distractions.

An HP Lab’s computer scientists’ study revealed that more users are influenced to change their way of thinking based on the majority rule – dependent on their online circle. Peer pressure continues to be an influence on a lot of users. This is a negative trait that inhibits a person’s own idea. People are afraid of sharing thoughts that are different from the majority fearing criticism, and effectively their self-esteem is lowered.

“It’s not about ‘don’t spend time on Facebook’, but just be aware of what it might be doing to you” – Professor Keith Wilcox, Columbia University.

More business is entering the social media world and it is luring more consumers to buy products online. Online purchasing is cheap and doesn’t consume time, which is exactly what the consumer wants – no delays, no physical effort involved. However, this ease of purchasing encourages irrational purchases without investment of thought and effort regarding the need for the products bought online.

A study from Women’s Health reveals that more people tend to feel hungry after they’ve viewed a couple of @ItsFoodPorn images online. A photo of a mega-food plate can trigger a part of the brain to compel observers to overeat. Beware of the content you see on social media, as it may have a major impact on your daily habits.

A lot of people enjoy online interactions and entertainment just as much as they enjoy online shopping. But this is coupled with impact on relationships in the real world as sometimes such interactions can lead to jealousy and suspicion. For instance, more couples fall prey to jealousy or breakups based on online posts. Another reason for such bitterness between partners is when a partner is caught keeping up with their ex in online conversations. Another example is of negative posts being put up online by people you may or may not know in the real world, but the content of the posts may trigger self doubt, aggression, biased opinions and so on.

Experts have not been in total agreement on whether internet addiction is a real thing, let alone social media addiction, but there’s some good evidence that both may exist. A review study from Nottingham Trent University looked back over earlier research on psychological characteristics, personality and social media use. The authors conclude that “it may be plausible to speak specifically of ‘Facebook Addiction Disorder’…because addiction criteria, such as neglect of personal life, mental preoccupation, escapism, mood modifying experiences, tolerance and concealing the addictive behavior, appear to be present in some people who use

[social networks] excessively.
” (They also found that the motivation for people’s excessive use of social networks differs depending on certain traits—introverts and extroverts use it for different reasons, as do people with narcissistic traits. But that deserves an article of its own.) Many people are addicted to the extent of checking their mobile phones and social media sites every few minutes, for no specific reason. Their day starts with looking at the mobile and ends the same way. Even children have developed this habit unfortunately. Studies have confirmed that people tend to undergo a kind of withdrawal when forced to stay away from social media for even short periods of time. People tend to get obsessed with checking their phones constantly and they can’t stay without it even for a few hours. It becomes like a drug, we get addicted to it and after a point, it becomes difficult to withdraw.

The more we use social media, the less happy we seem to be. One study a few years ago found that Facebook use was linked to both, less moment-to-moment happiness and less life satisfaction – the more people used Facebook in a day, the more these two variables dropped off. In fact, another study found that social media use is linked to greater feelings of social isolation. The team looked at how much people used 11 social media sites, including Facebook, Twitter, Google+, YouTube, LinkedIn, Instagram, Pinterest, Tumblr, Vine, Snapchat and Reddit, and correlated this with their “perceived social isolation.” No surprise at all, it turned out that the more time people spent on these sites, the more socially isolated they perceived themselves to be. And perceived social isolation is one of the worst things for us, mentally and physically.

Mentally unhealthy comparison with others

Part of the reason Facebook makes people feel socially isolated (even though they may not actually be) is the comparison factor. We fall into the trap of comparing ourselves to others as we scroll through our feeds, and make judgements about how we measure up. But most of us do not realise that majority of the posts, photographs and check ins are shared by people about the high points of their lives. For example, most would share photographs of celebrating a promotion party but rarely anybody would share an image after having a bad day at work.

Jealousy – and a vicious cycle

It’s no secret that the comparison factor in social media leads to jealousy – most people will admit that seeing other people’s tropical vacations and perfectly behaved kids is envy inducing. Studies have certainly shown that social media use triggers feelings of jealousy. It creates SUSPICION and JEALOUSY even in older married couples and it disrupts well being of a person. People tend to keep their phones under their pillows, keeping passwords on their phones, etc leading to problems between partners. Overall, relationships are being affected negatively because of social media.

Delusion of thinking it will help

Part of the unhealthy cycle is that we keep coming back to social media, even though it doesn’t make us feel very good. This is probably because of what’s known as a forecasting error – like a drug, we think getting a fix will help, but it actually makes us feel worse; this boils down to an error in our ability to predict our own response.

A couple of years ago, a study found that more friends on social media doesn’t necessarily mean you have a better social life – there seems to be a cap on the number of friends a person’s brain can handle, and it takes actual social interaction (not virtual) to keep up these friendships.

Social media has made it easy for many to become just plain lazy. With the touch of your fingertips you can post a question to your social sites asking others for ideas rather than using your own imagination and thought process to generate an idea. Original thinking can easily be replaced by utilizing readily available information online, thus eliminating the need to create or come up with ideas. It also negates the actual physical effort involved in something as simple as going to the library, looking for a book in the house, going over to a friend’s place to seek help, making notes for the next day at work, etc.

Most social media sites have strict guidelines about age limits. However, young children may lie about their age in order to activate an account. These sites are not meant for the young brains. As a result, children may be exposed to language, pictures or content that is not appropriate for their age. Young minds are not equipped with the mentality to handle forms of cyber-bullying or online harassment that can occur. This can tie-in directly with depression which could even lead to physical harm.

Recently one of my astro-family members shared a shocking incident with me. She has a three year old nephew, her brother’s son, whom she had to baby sit one evening when the parents were out. When it was time to go to bed and she struggled to get him to sleep, he quite casually pointed out to her, “Bua, mail tab tak nahi sounga jab tab aap mobile hone nahi chalaoge.”, indicating that the child is used to going off to sleep when a mobile phone is being used and is somewhat dependent on that. This incident and similar ones are something that most young parents are facing these days without realizing the implications that the use of mobile phones and social media has on a brain that is still developing, a thinking that is still maturing and an innocence which is being rapidly lost. Such incidents are a testament to the fact that excessive use of mobile phones, laptops and social media has been passed on to the next generation. As the years pass by, the obsession with social media and mobile phones among young children is bound to increase further if we don’t make a conscious effort to reverse the impact by getting rid of the impulsive habit of checking and using our mobile phones throughout the day and even at night.

ZEE BUSINESS CHANNEL – ‘Texting Addiction’: This is how you could be affected by it – EPISODE DATED 21.07.2018 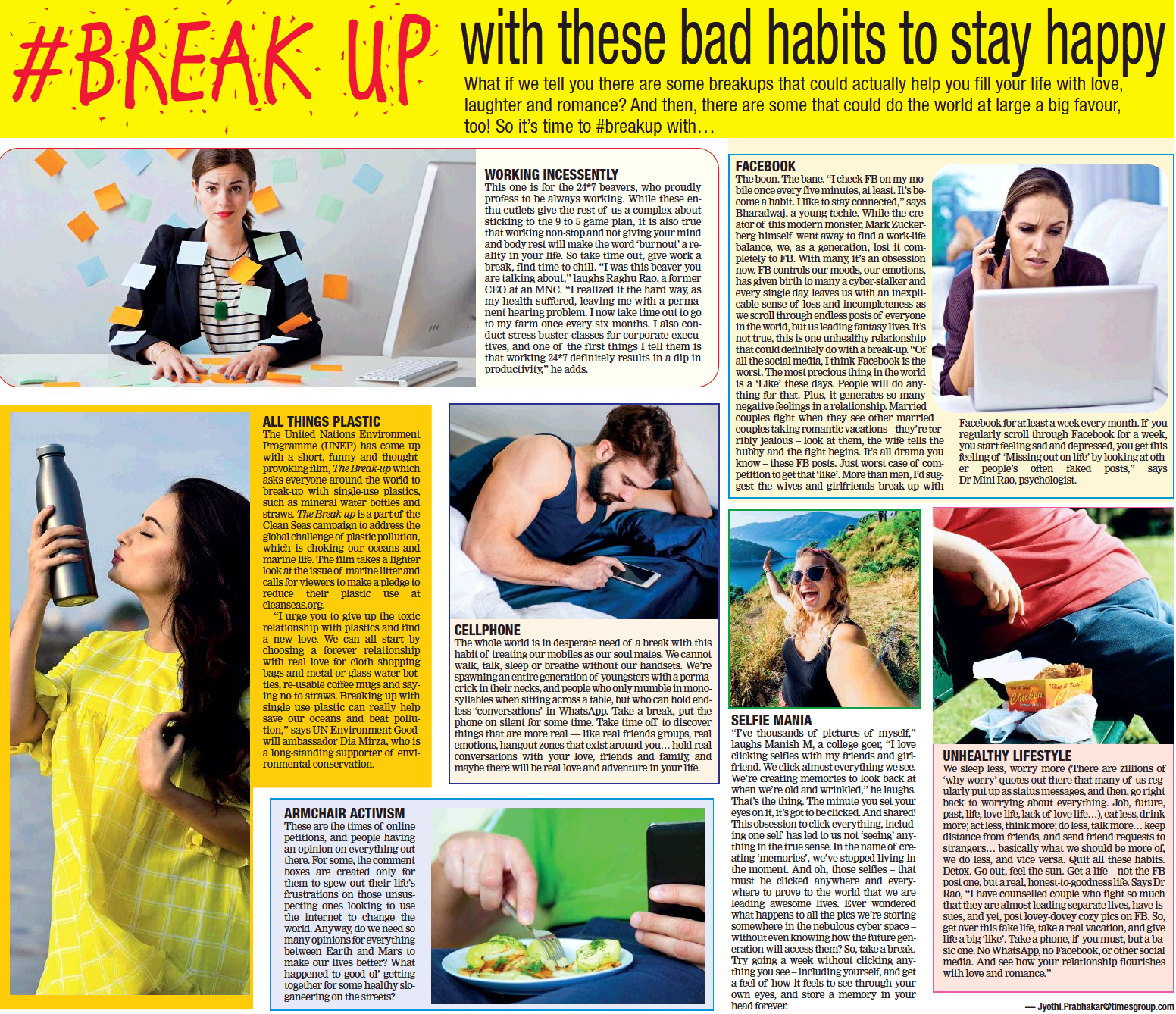 Social media has its negative side, causing harmful self-esteem problems for numerous people, whether it is in the form of depression, lower grades, psychological disorders, online/cyber bullying or future health problems. However, this can be cured as studies show that users who are educated well about social media understand how to use it effectively and safely. Therefore, we suggest that every user should research and get trained on the effective ways of using social media.

Technology is a wonderful advancement that can bring many new and exciting things to enhance a person’s life. Using social media in a way that is productive and constructive can be a rewarding experience. However, too much of anything can be a harmful. As with everything else in a person’s life, some education and agood balance are essential for a healthy outcome.