Celebrating 70 years of independence, India has much more to achieve. Know the astrological aspects of Independence day .
On 15th of August, 2017, India will celebrate the 70th anniversary of its independence. In these 70 years of freedom, India has progressed well in the fields of technology, economics, education, warfare, energy, etc. There is still much more to achieve as India is still a developing nation. People may want to know , what will be the conditions of the Hindustan after this Independence day. www.vedicastrologysolutions.com Vedic Astrology comes handy ,can tell a lot. By applying the principles of astrology, we can discover what future lies ahead for the country, what will be the political conditions, if the problem of mass unemployment would be solved​, what will be the relations of the country with China and Pakistan. Let us have a Short and General look as to what is in store for Hindustan, by using the birth chart (Kundali) of India.
We Are Not Giving Detailed Post .
India got independence on 15 August 1947, at 12 o’clock in midnight. Thus, the free nation of India was born at this moment. According to the given time, the birth chart of India is as follows: 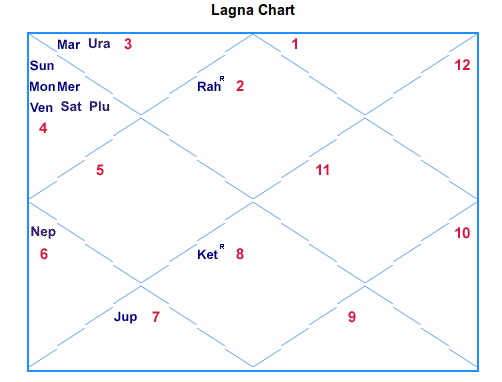 According to this Kundali, India has Taurus Lagna and the shadowy planet Rahu is also posited in the first house. The second house is occupied by the fiery planet Mars. Venus, Mercury, Sun, Moon and Saturn are present in the third house, while Jupiter is posited in sixth house and Ketu in the seventh house. Pisces is the Lagna in the Navamsa birth chart. Both the charts show happiness and prosperity for the nation. From the time of independence, India has faced the major period (Mahadasha) of Saturn, Mercury, Ketu, Venus, and the luminary Sun. The country is having the Mahadasha of the Moon and Rahu from February 2017. According to the birth chart, the Moon is in the third house in Moon Sign Cancer, and Rahu is in the first house under the Moon Sign Taurus. The third house represents courage, bravery, neighbors  changes, communication, aspirations, and mental inclinations. The Lagna house indicates the health, personality, and security of one’s own self. The lord of the third house is in third house itself, which represents a positive image at the international level and self confidence of the nation.www.vedicastrologysolutions.com

Is the economic condition of India going to improve?

India may witness a major turn around in the field of economy from August 2017 to August 2018. The import and export business of the country will grow multifold, and many multinational companies and foreign companies would improve the prevalent conditions of the country. Things will get less expensive during the year, but the public might still not be convinced with the pricing. Employment would increase, but more unemployed youth would rise on the surface. This would be dealt in the parliament by passing new bills. Progress would be seen in the fields of technology, fashion, cosmetic products, etc.

Tension with China and Pakistan will continue

In the Kundali of India, the Lord of the third house is Moon and it is posited in the third house itself. This foretells that India will be able to stand out at the global level. However, tensed situations with neighbouring countries of China and Pakistan will continue. The nation needs to be careful of these countries and should not let its guard down. India will shine at the international level with its policies and ideas, and would gain importance in international forums.

Is the political condition of India going to change?

A dynamic change can be witnessed in the political condition of the country after August 15, 2017. This will take place due to the position of Rahu in India’s birth chart. The public might begin to oppose certain political parties. Also, the ruling party might face some rebellion from the common masses. Communal issues would remain the highlights in the country, which might lead into the polarization of the society on the basis ofcommunities.www.vedicastrologysolutions.com

Due to the position of the Moon in Cancer and Rahu in Taurus, problems related to food and water might arise. Floods, famine, earthquakes, agricultural damage, scarcity of water, water borne diseases, etc. might hit the nation. Also, there are chances that violence against women might also increase, which is something that needs to be controlled at the earliest.
JAI HIND
GOD BLESS HINDUSTAN
TEAM VEDIC ASTROLOGY SOLUTIONS